Street drugs give addiction specialists unique challenges thanks to the varying nature and purity of the drugs involved. Street drug rehab programs generally focus on minimizing the damage done and gradually weaning the addict off the drug. Street drugs include any drug that is sold on the street, and they usually refer specifically to those that are illicitly manufactured.

What Are Street Drugs?

A street drug can be any one of a number of drugs, ranging from MDMA (ecstasy) and crystal meth to plant-based drugs such as cannabis or heroin. In general, street drugs are different from prescription drugs because they have few controls as to their purity and active substances. While abuse of prescription drugs is not safe by any stretch of the imagination, the doses involved are at least consistent, and you know what you’re getting. 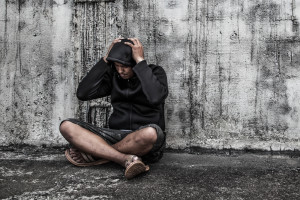 Street drugs are typically adulterated with other compounds. A 2006 study published in the British Journal of Anaesthesia noted that ecstasy may contain between 30 to 150 mg of MDMA “or none at all.” It commented that typical adulterants include acetaminophen, ketamine (a dissociative anesthetic), meth, and caffeine.

If the ecstasy pill doesn’t contain ecstasy, what does it contain? Other, more dangerous drugs such as AMT (alpha-methyltryptamine) or 5IT (5-(2-aminopropyl)indole) have been found in tablets. It might even be just a load of talcum powder with nothing else in it. The point is that you simply don’t know what’s in the pill.

Whenever there’s a spate of heroin deaths, toxicology experts usually surmise that the batch was more pure than usual, leading to fatal overdosing. Because of the lack of controls and testing, there’s no real way to test the batch before someone injects it. If the dose is weak, users simply inject more. If the dose is too strong, users inject the usual amount—and simply end up dying, unless someone can pump the addict full of naloxone before it’s too late.

The same goes for any other drug that’s manufactured in backstreet labs. One of the worst drugs for contamination is meth, as it uses several highly caustic or corrosive ingredients in its manufacture. Red phosphorus, sodium hydroxide (lye), and hydrochloric acid will mess you up almost as badly as the drug itself.

Street drug treatment programs vary according to the sort of drug involved. If the addict is a risk taker and has taken a wide variety of drugs, sometimes known as a dual diagnosis, an inpatient stay is usually recommended. These are used for high-risk withdrawals where there’s a chance of complications. With a potentially unknown combination of drugs involved, it’s the safest option.

Where there’s only one regular drug being taken, such as cannabis or ketamine, street drug programs usually involve outpatient treatment. This means addicts attend a center on a regular basis for checkups, but the majority of the treatment time is spent at home. Drug tests are often a key part of this to ensure that the drugs are leaving your body, but it also ensures that you’re not falling back into old habits.

Are Street Drugs Bad For Me?

“Most drugs will eventually cause tolerance, including marijuana and many prescription medications. You’ll find that you need a little more each time to get the same buzz, and eventually, this can lead to overdose.”

You probably already know this, but street drugs are rather nasty for the reasons listed above. There are other reasons, though. Aside from the fact you don’t know what’s in them, they:

Let’s deconstruct these reasons a little. First, dependency and tolerance are not the same thing, although they’re often associated with each other. Tolerance means you need more of the drug to get the same effect. Dependence means you suffer from withdrawal symptoms when you stop taking the drug.

Most drugs will eventually cause tolerance, including crack and many prescription medications. You’ll find that you need a little more each time to get the same buzz, and eventually, this can lead to overdose.

Dependence is common in many people who build up a tolerance and results in withdrawal symptoms. In short, these symptoms often include:

Depending on the drug, you might also suffer from a racing heart or suffer from associated cardiac or pulmonary symptoms. Of course, this list varies from drug to drug and person to person. Only around one in nine people suffer from withdrawal symptoms after taking marijuana for over a year, for example, but the vast majority of meth users will experience withdrawal after a few weeks of use.

This is where drug specialty programs can really help. Street drug rehab programs help people get off the drugs they’re on in a systematic way, and many cater to complex cases that involve multiple drugs.

The next point is risk-taking behavior. Taking drugs is a risk in itself, but this is compounded by the lack of judgment that many of those under the influence of drugs exhibit. Think back to a time when you were drunk and did something silly. It’s a virtually identical concept. A 2011 study published in Neuron indicated that these behaviors are associated with the hijacking of the brain’s reward system by the drug, leading to an “overvaluation” of the drug’s reward.

What this means is that the brain codes the concept of “drugs are good” to itself. This disrupts other assessment methodologies that the brain uses, and it leads to an increase in risky behavior. Street drug rehab centers aim to essentially reprogram this concept.

Risk taking can lead to financial issues, and this may be because of strict laws and employment policies toward those caught taking drugs. This means you can end up penniless thanks to very harsh penalties. In addition, you might find that your judgment is impaired to the point where you lose your job. Family relationships are often strong, but when an addict’s behavior becomes unreasonable, it can cause a breakdown of trust. In addition, the disruption to the brain’s risk-reward system can mean that addicts become caught in compromising situations, including infidelity and theft.

So What Can I Do?

Street drug rehab centers are here to help. Whether you’re addicted or you’re trying to help someone you love, we can put you in contact with the right place. Call us at 1-888-851-2649 Who Answers? with any questions you may have about addiction or the treatment process. We can also help you locate a street drug rehab program that is best suited to your needs.