How many ounces of Marijuana is a felony?

But what if we said you could be arrested on felony marijuana possession in Colorado? Yes, as of March 2015, eight ounces of marijuana could draw a felony charge in the state famous for legalizing recreational marijuana in 2012.

Travel southwest into Arizona, and any amount of recreational marijuana suddenly becomes a felony. 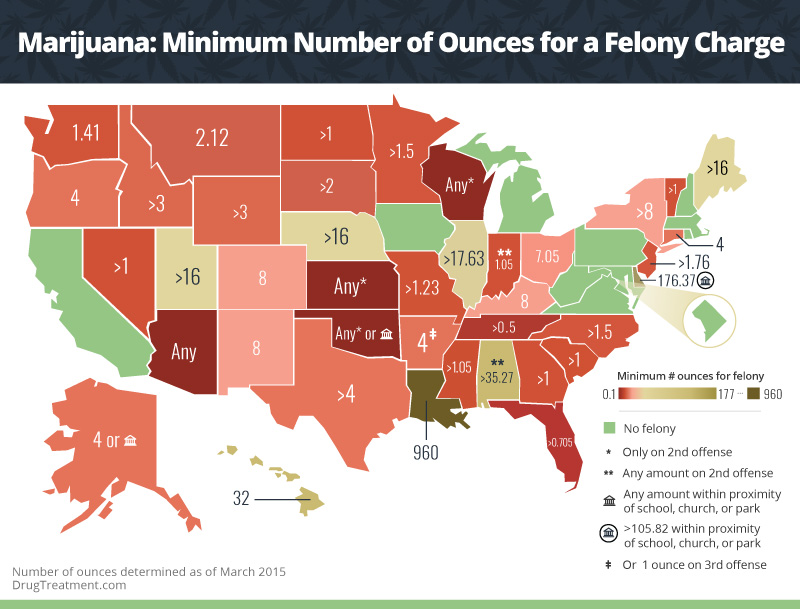 So what’s up with that? Across the U.S., marijuana laws differ greatly. If you don’t know the law, you can find yourself in a world of hurt.

What amount of Marijuana is a felony?

While it’s legal in Colorado to use marijuana recreationally, there are limits to the amount you can possess before it becomes a misdemeanor or felony. The same goes for Washington, Oregon, and Alaska, all of which have voted to legalize recreational marijuana.

Felonies, don’t just land you in jail – they also result in a significant loss of civil rights. With a felony on your record, you may no longer have the right to own a gun, the right to vote, the right to hold political office, the right to serve as a police officer, and more. In addition, many employers refuse to hire convicted felons, making it difficult to find work following a judgment.

Let us be clear: We’re not downplaying the severity of a misdemeanor. A misdemeanor is still a criminal offense – and in a state such as Montana, it could land you in jail for three years.

Having a felony on your record will significantly change your life for the worse, and depending on where you live, it may not take that much on the scales to bring down the hammer.

The map above illustrates how differently the 50 states (and D.C.) handle punishment for marijuana possession. It shows the minimum weight of marijuana in ounces one can possess in each state before he or she receives a felony charge and everything that comes with it. That’s right, possessing even two ounces of marijuana in a recreational state such as Washington could lead to a felony arrest. 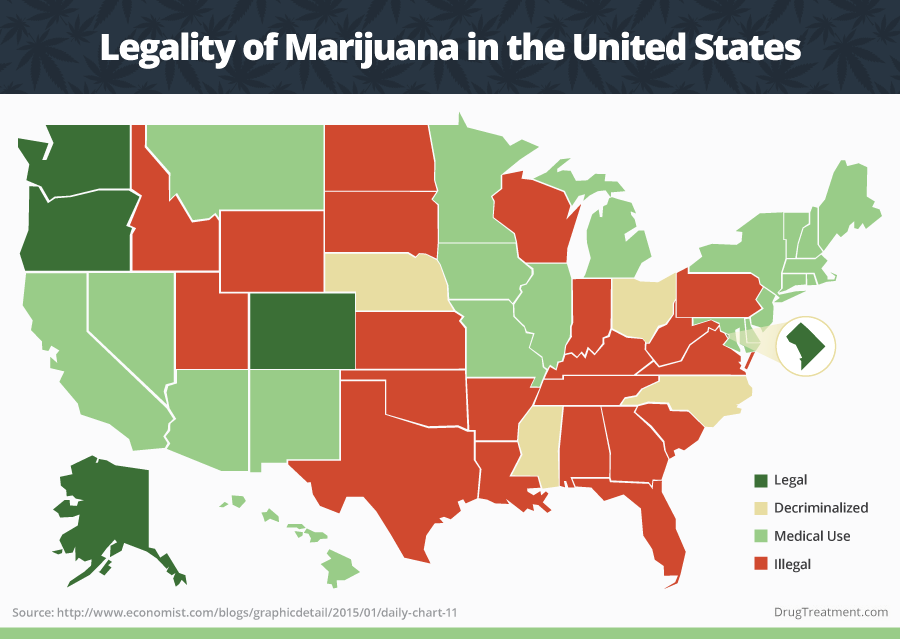 This map shows the current state of marijuana reform across the United States. As you can see, marijuana, including medical marijuana, remains illegal in a good portion of the South, along with western, conservative states (except Alaska, which voted to legalize recreational marijuana in 2014). Throughout the country, decriminalization of marijuana is also a growing trend for states that don’t wish to populate prisons with first-time, non-violent marijuana offenders. 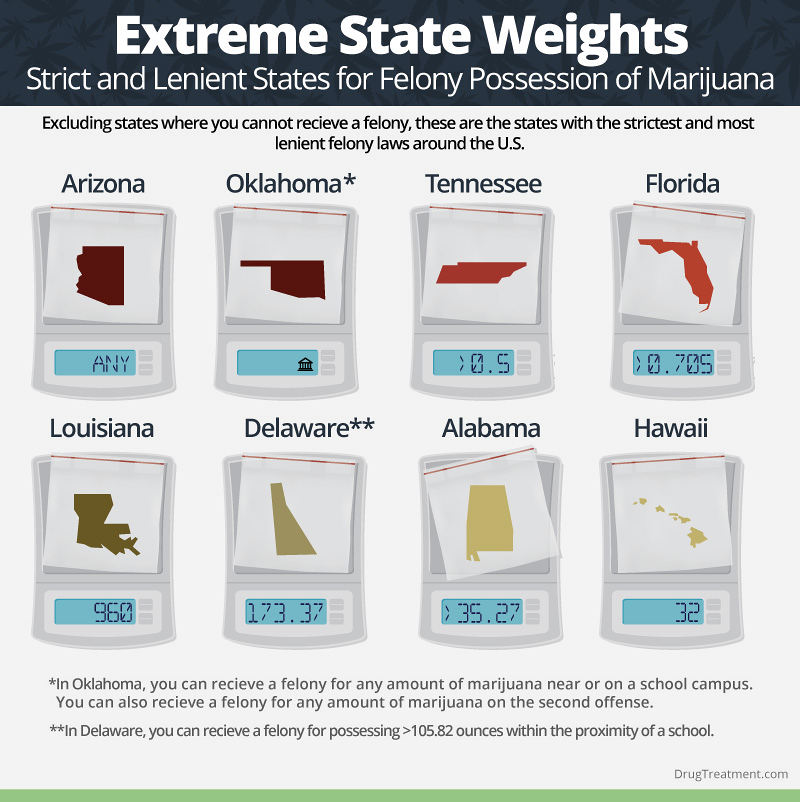 These states don’t play around. If you’re caught with marijuana here, even a relatively low amount on your first offense will doom you.

Arizona- If you’re living in the deserts of Arizona, it’s particularly unwise to keep marijuana around. Arizona is the strictest state in America in terms of enforcing marijuana possession. In fact, it’s the only state in the union where any amount of marijuana will draw a guaranteed felony charge on the first offense.

Florida- Florida’s medical marijuana ballot initiative failed in the 2014 midterms – not a shocker considering it’s one of the top five most unforgiving states to first-time offenders caught with marijuana. Carrying more than 0.7 ounces will earn a felony in the Sunshine State.

Oklahoma- The only state rivaling Arizona’s strictness on a first offense is Oklahoma. Any amount of marijuana will earn you one year in jail, and the state can charge you with a felony or misdemeanor.

Tennessee- The Tennessee government is currently recruiting farmers to take part in an industrial hemp-growing program, but don’t think that means it’s a reefer party at the Grand Ole Opry. In fact, Tennessee’s law makes a felon out of anyone carrying any amount over a half-ounce of marijuana, making it one of the most extreme states in the union.

It’s important to note that, when highlighting the states toughest on marijuana in terms of felonies, we’re talking about first-time offenses. None of the following states have decriminalized recreational marijuana possession in small amounts.

It’s also important to note that, in many of these states, possession of marijuana is still a misdemeanor or other offense that can result in jail time. For example, while a state such as Alabama might let you off the hook once, it soon becomes a zero-tolerance law, where getting busted a second time following a misdemeanor possession arrest turns into a felony.

Delaware- If you’re going to get an automatic felony for first-time marijuana possession in Delaware, you’re going to have to really earn it. It takes possession of 173 ounces before getting a felony slapped on your record. That’s the weight of a medium-sized bowling ball – in weed.

Hawaii- Hawaii’s got a reputation as an easy-going place. It should come as no surprise that it’s one of the nation’s most forgiving states when it comes to felony marijuana possession. In Hawaii, marijuana possession under 32 ounces will not draw a felony charge.

Alabama- The state of Alabama believes in second chances – not so much third ones. You would have to be caught in possession of more than a kilogram – 35.27 ounces – to be charged with a felony; however, Alabama’s not so generous if its authorities catch you again. Any amount of marijuana will earn a felony on the second offense.

Louisiana- Louisiana’s explicit, automatic felony for marijuana possession comes to the truly dedicated. It requires an insane 960 ounces of ganja to draw a felony possession charge in The Big Easy’s home state. That’s about 27 kilos or 60 pounds. In short, that’s a lot of weed.

It should be noted, however, that possession of small amounts of weed can still rack up serious jail time. Louisiana might not make you a felon, but it’s first-time marijuana possession is an unclassified offense that can land you in jail for up to six months. The second time? Up to five years. Third time? 20.

With marijuana reform a hot topic in U.S. politics, it’s important to take a look at just how seldom states see eye to eye on how to treat nonviolent offenders guilty of possession and how severely states will punish offenders. An ounce in Colorado is legal. Travel one state southwest and that same ounce will wreck your life.

We should warn this page is not intended to offer legal advice. Instead, we’re trying to call out the inconsistency of penalties for drug possession and how differently states treat non-violent, first-time drug offenders caught with a drug some states have legalized.

Drug-related felonies are just one of the risks of illegal drug use. In some instances, even widely decriminalized drugs such as marijuana can, with regular use, elicit a pattern of dependency and its associated negative repercussions – on health, workplace productivity, with family or social connections and, even, with the law. If you or a loved one is struggling with substance abuse issues, call 1-888-851-2649 Who Answers? for more information on how to get the help you need today.

We looked at each state’s marijuana laws to determine the weight in ounces required to earn a felony in each state. We also noted which states did not have felony possession laws and which states had additional stipulations regarding subsequent offenses. For states that did not list weights in ounces and used grams, kilograms, or pounds, we converted the numbers into ounces.

Publishers may freely use the images found on this page. When doing so, we ask that you kindly attribute the creators of this project by providing a link back to this page so your readers may learn more about the project and its methodology.