Drug and alcohol addiction is a crisis that just seems to keep getting worse. Currently, an estimated 21.5 million American citizens meet the criteria for a substance use disorder – meaning roughly 1 in every 10 Americans over the age of 12 struggles with addiction. And that number has grown at an alarming annual rate. However, only a fraction of these individuals – less than 11% – receive the care and support they need to recover from these potentially life-threatening addictions.

Approximately 47,055 U.S. citizens died from drug overdoses in 2014 – more than any previous year on record. As overdose deaths (particularly from opioids) continue to rise, the demand for adequate treatment remains far from being met. To shed light on this disturbing undertreatment of addiction in the U.S., we gathered information from the latest NSDUH State Survey and the most recent TEDS substance abuse treatment admissions data. Read on to see who is seeking treatment for various substances across the country – and who isn’t. 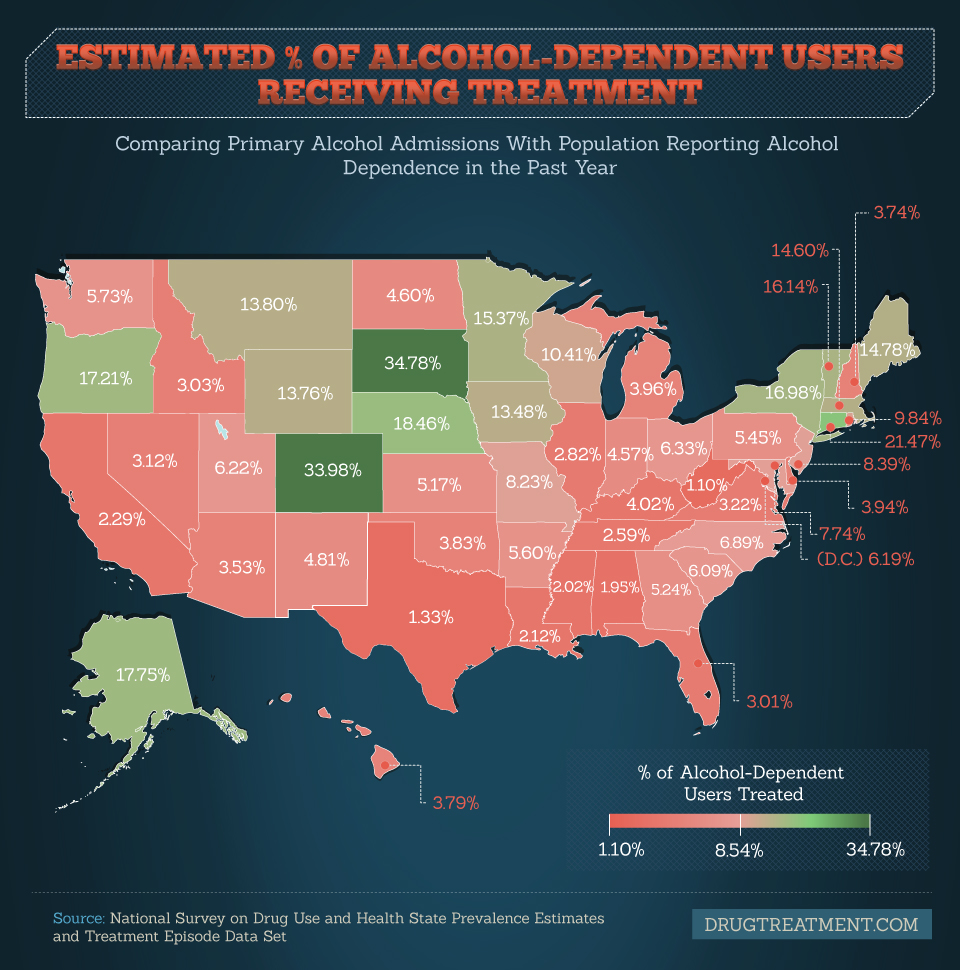 First, let’s look at the estimated percentage of alcohol-dependent users who are treated for their addiction. The five states with the lowest treatment rates are located in the South. In West Virginia, only around 1% of people who need treatment for alcohol abuse actually receive it. In Texas and Alabama, less than 2% get help, while in Mississippi and Louisiana, just over 2% do. 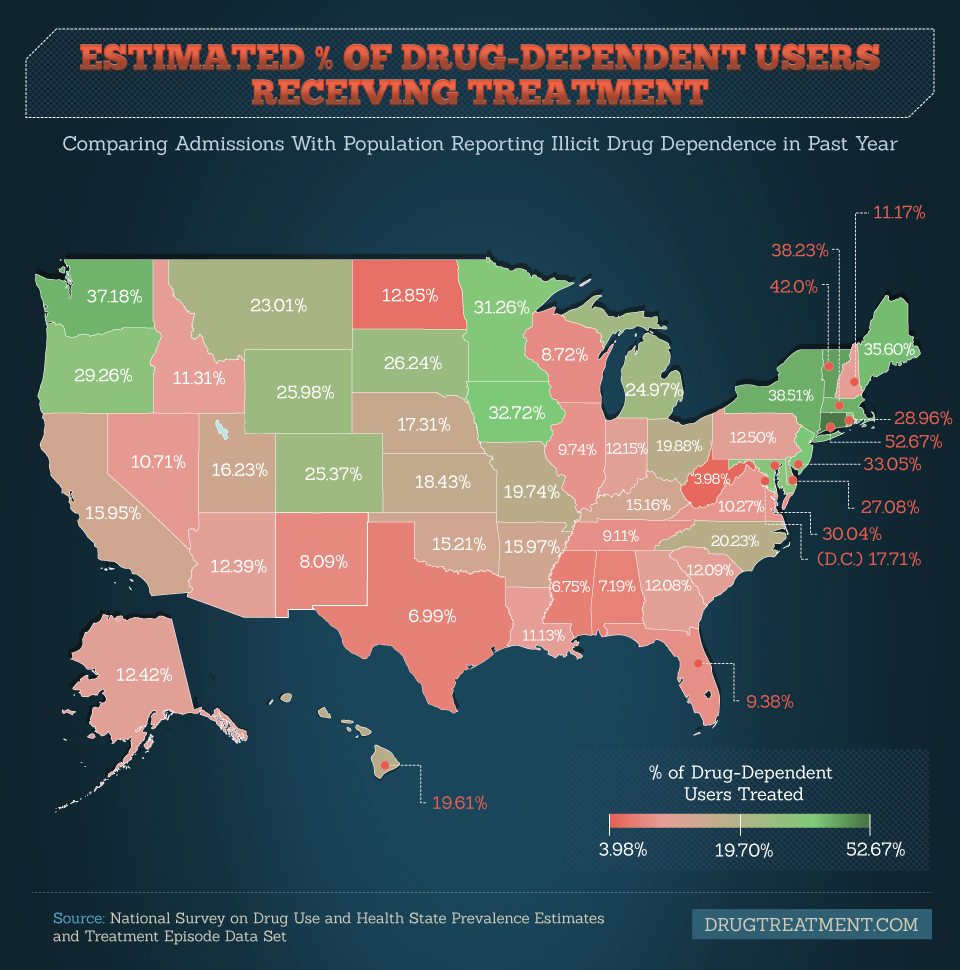 On the other hand, the highest treatment rates for problematic drug use are found in certain Northeastern states. In Connecticut, a whopping 52.7% of people dependent on drugs get substance abuse treatment. Vermont (42%), New York (38.5%), and Massachusetts (38.2%) claim the next three spots, while Washington has a rate of 37.2%. The national average rate for drug treatment is 19.7%, which means that more than 80% of individuals with substance abuse problems do not receives the treatment they so desperately need. 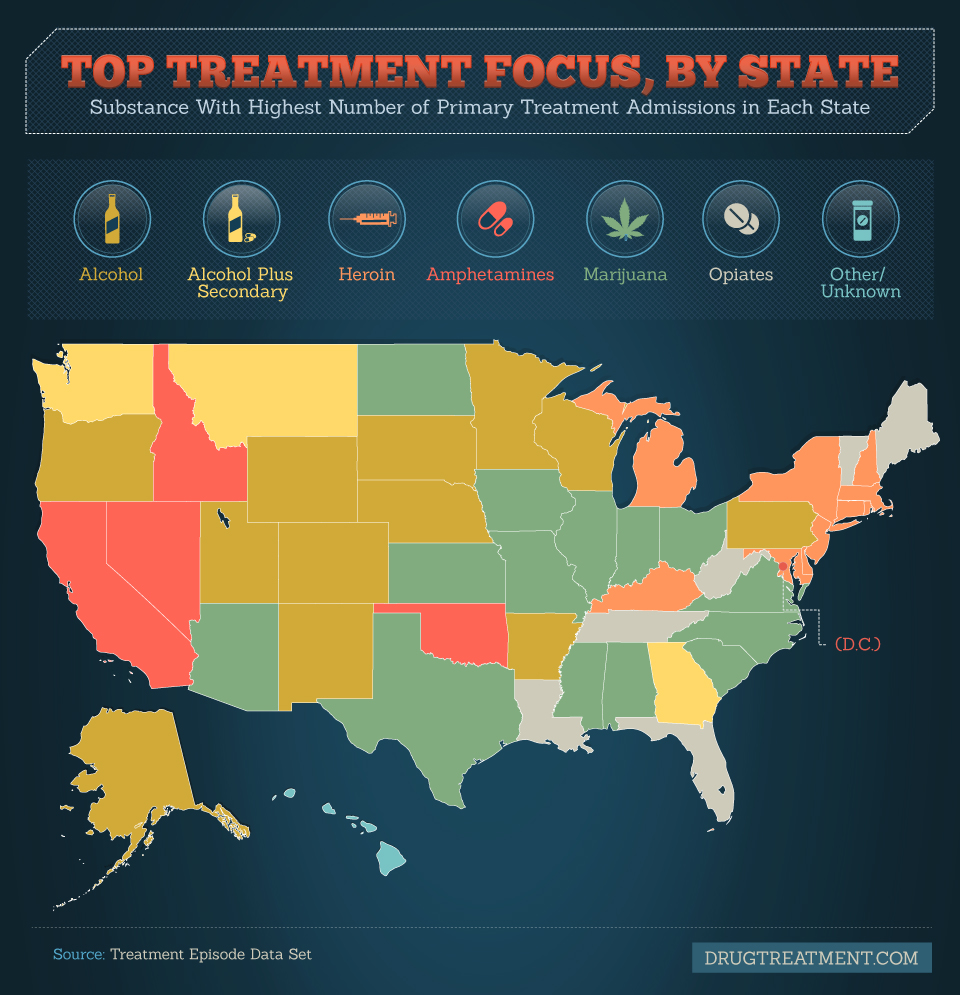 Taking a look at statewide treatment admissions based on abused substance type, we can see that alcohol reigns throughout the majority of Middle America. Opiates and heroin dominate much of the Northeast, while amphetamines prove to be a major source of addiction in California, Nevada, Idaho, and Oklahoma.

What is most shocking: the exceedingly widespread amount of treatment sought primarily for marijuana addiction. Marijuana is the primary reason behind treatment admissions in a total of 14 states spread across the nation, though none further west than Arizona. Alcohol and heroin are each the primary cause for the majority of treatment admissions in 12 states apiece, though alcohol plus a secondary reason is the main cause in three states. Alcohol and marijuana admissions combined comprise a much larger portion of the country geographically than heroin and opiates. Is marijuana truly a bigger national issue than heroin? Or are treatment options for opiate dependency simply severely lacking? 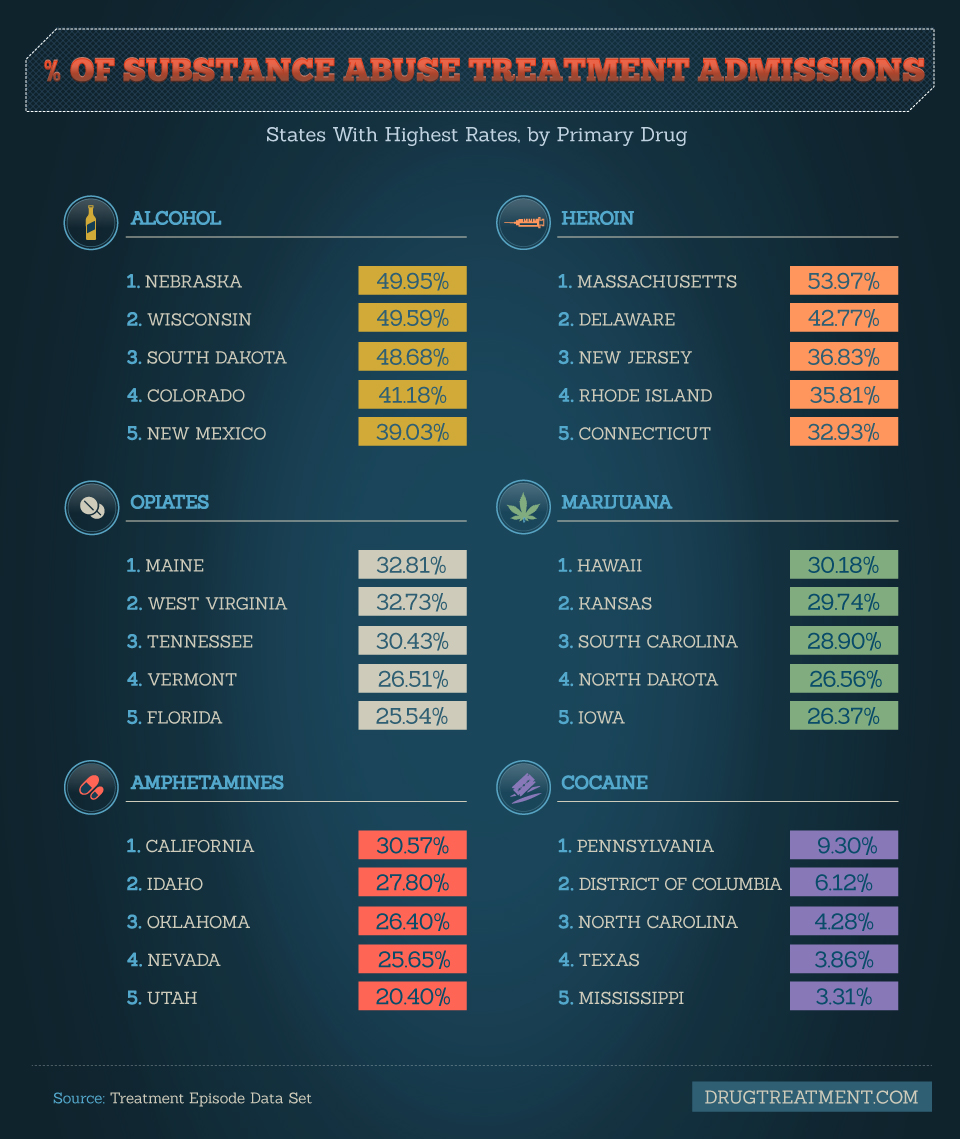 Breaking down treatment admission statistics by state reveals some surprises. Alcohol treatment dominates in Nebraska, Wisconsin, and South Dakota; nearly half of all treatment in these states is for alcohol abuse. In Massachusetts, almost 54% of the treatment sought is for heroin.

Looking at the percentage of admissions for differing substances, we can see that on a national level alcohol abuse treatment is more commonly sought out than other types of treatment. Meanwhile, rates of treatment for marijuana, heroin, and opiates dependency vary significantly by state. Cocaine and crack cocaine abuse are the least frequent types of treatment received. 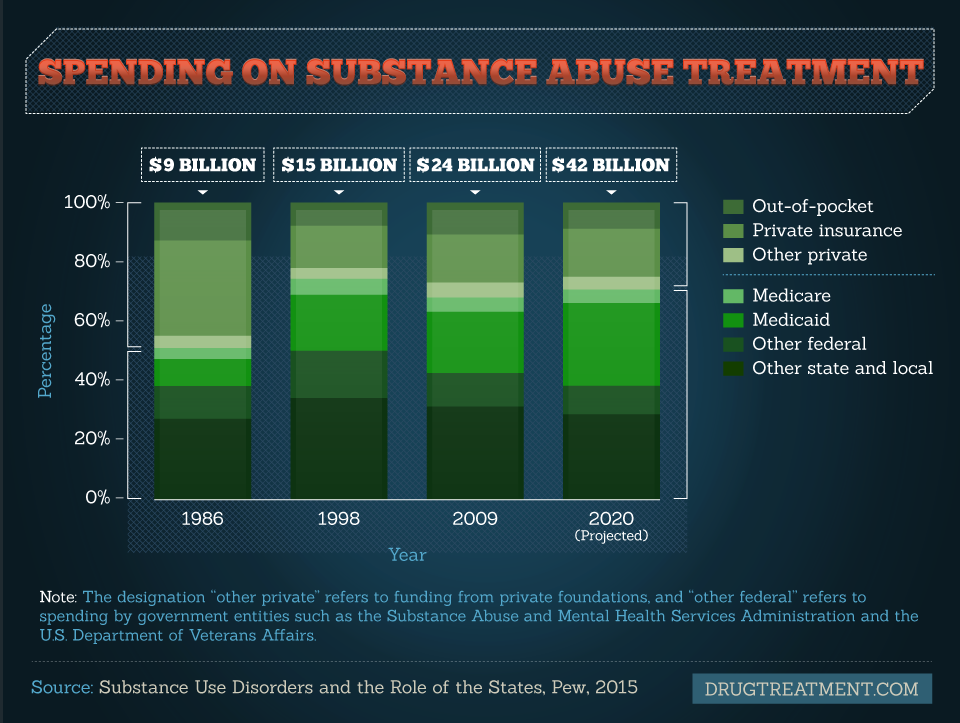 Over the past several decades, Medicaid has taken over as the predominant source of treatment funding. However, the vast majority of treatment centers across the United States do not accept Medicaid, relying solely on out-of-pocket payment and private insurers. The lack of adequate care for individuals without private insurance or financial stability contributes greatly to the alarming number of individuals with drug and alcohol abuse problems who remain untreated.

From 1986 to 2009, national spending on substance abuse treatment increased by a total of $15 billion. Still, America as a whole remains devastatingly undertreated. State and federal funding for treatment currently contribute about 38% to the total expenditures. For more individuals to receive the help they need, this percentage will need to increase (rather than decrease, as projected for 2020).

As it stands, only one out of every 10 individuals with a substance abuse problem receives the necessary treatment. While treatment admissions are clearly lacking across the country, rates of national drug use continue to skyrocket. The United States as a whole remains significantly undertreated – though it’s not a problem without a solution.

The majority of alcohol- and drug-abusing men and women who are not receiving adequate care either lack the financial means or health insurance coverage to enroll in a professionally facilitated program. Increasing the availability of state-funded treatment may make a significant impact on accessibility, and improving national health insurance coverage could make treatment far more available to those who need it. Additionally, simply increasing awareness of pre-existing treatment options could lead to higher levels of treatment received.

Marijuana and alcohol are the main causes for admission – somewhat shocking, seeing as the threat of marijuana-related mortality is exceedingly small compared with that of any other chemical substance. This fact further leads to the conclusion that suitable treatment is inaccessible to the majority of those who need it. Without an increase in public care, more accessible health insurance policies, and a continuously improved circulation of knowledge regarding addiction treatment, the gap between those struggling with substance abuse and treatment received will only continue to widen.

Many men and women who need substance abuse treatment do not have the means or information necessary to receive the help they deserve. If you have been unsuccessful in seeking treatment from a state-funded facility, or simply are unaware of treatment options available to you, give us a call at 1-888-851-2649 Who Answers? – treatment support advisors can help you explore a wide array of addiction rehabilitation options. Browse our site at DrugTreatment.com, or fill out our treatment inquiry form to receive more information about recovery programs.

We used estimated percentages of alcohol-dependent and illicit drug–dependent populations from the latest 2013–2014 NSDUH State Survey and total population estimates from the Census Bureau to calculate the number of alcohol-dependent and drug-dependent residents per state. We then compared these figures with the most recent TEDS substance abuse treatment admissions data for each state (2014 or latest year available) to calculate the percentage of the substance-dependent population that received treatment.

We also used the same TEDS data (2014 or latest year available) to examine state treatment admissions by primary substance of abuse. In the “Other/Unknown” category, we grouped substances with the low treatment admissions (hallucinogens, tranquilizers, sedatives, inhalants, and other/unknown) for simplicity.

Please feel free to share the images and information found on this page. When doing so, we ask that you kindly attribute the creators of this project by providing your readers with a link back to this page so they can read more about the research and our methodology.