Many of us are familiar with the concept of a “new year, new me” mindset. Whether or not you take New Year’s resolutions seriously, you might have a general idea of what you’d like to improve on throughout the year in terms of finances, mental health, physical health, and overall habits.

For some, these habits involve substance abuse. Quitting or cutting back on drug use can be difficult at any point in the year, but many decide that the beginning of the year is the time to change. In order to explore this phenomenon, we collected thousands of tweets containing any combination of the words “new years resolution” from December 2014 through early January 2015 and 2016 and analyzed how many of these tweets mentioned a drug of abuse. 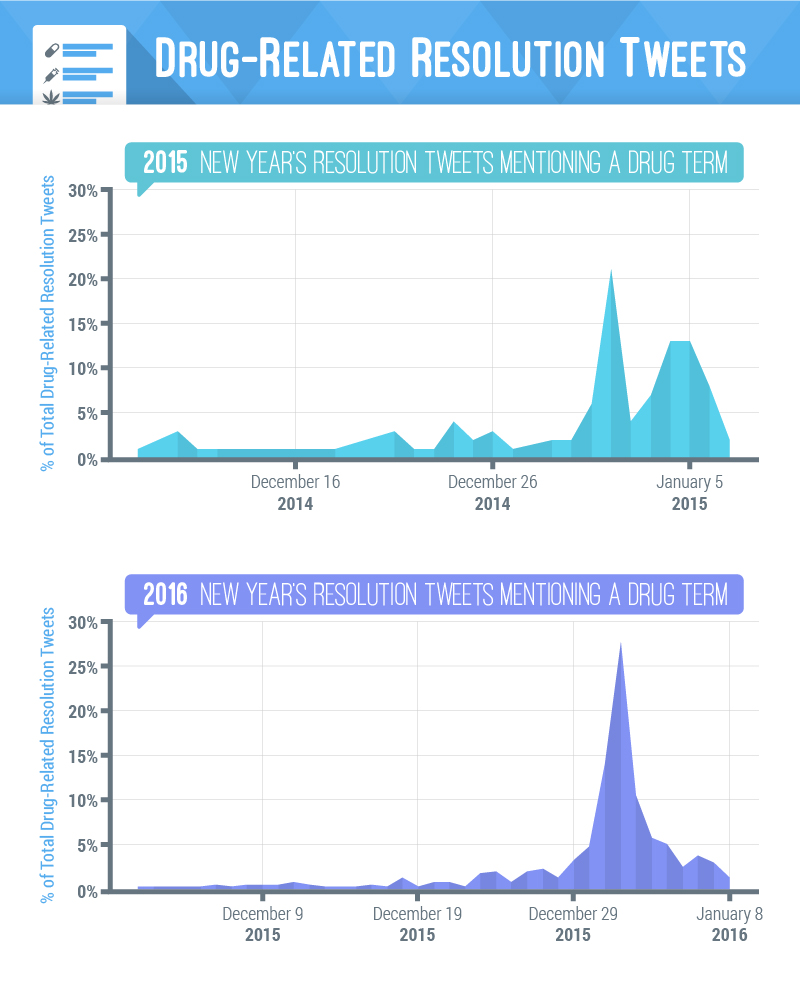 The charts above show the difference in drug-related resolution mentions featured on Twitter. As you can see, it is relatively common for people to begin tweeting about drugs in regards to resolutions right around the end of December and the beginning of January. In 2015, tweets with mentions of drugs peaked at 21% of total drug-related resolution tweets on January 1. In 2016, the same tweets peaked at 27.5% on January 1 – a 31% increase from 2015. 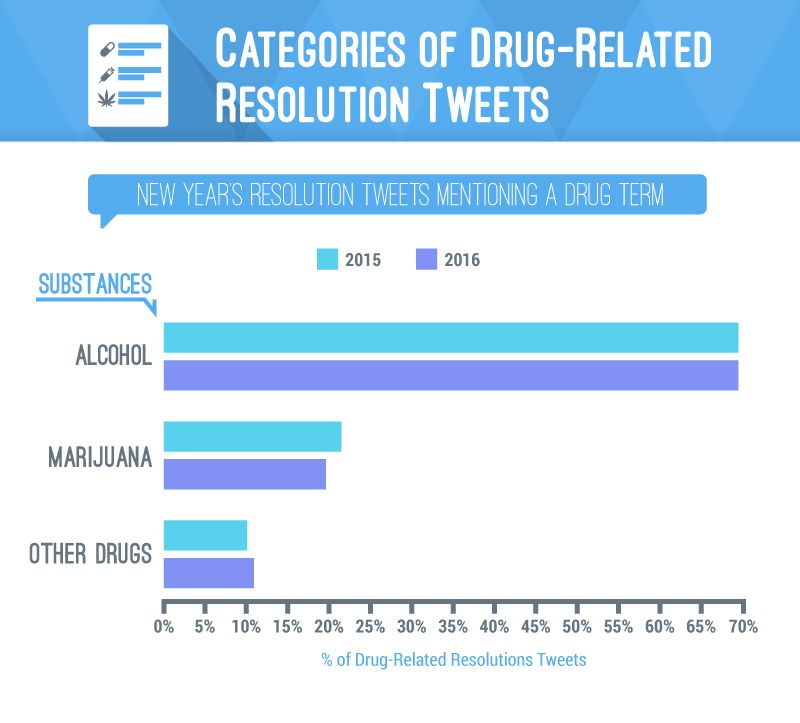 The charts above represent the percentage of total drug-related resolution tweets. Tweets referring to alcohol, marijuana, and other drugs are displayed for 2015 and 2016, respectively.

What does the word “drug” refer to in these instances? The most common drug people discuss, at least according to Twitter, is alcohol. Alcohol is a common drug due to its legality and social influences – almost 70% of people tweeting about drugs around the new year in 2016 were referring to alcohol. Marijuana follows with 17% of total drug-related tweets. 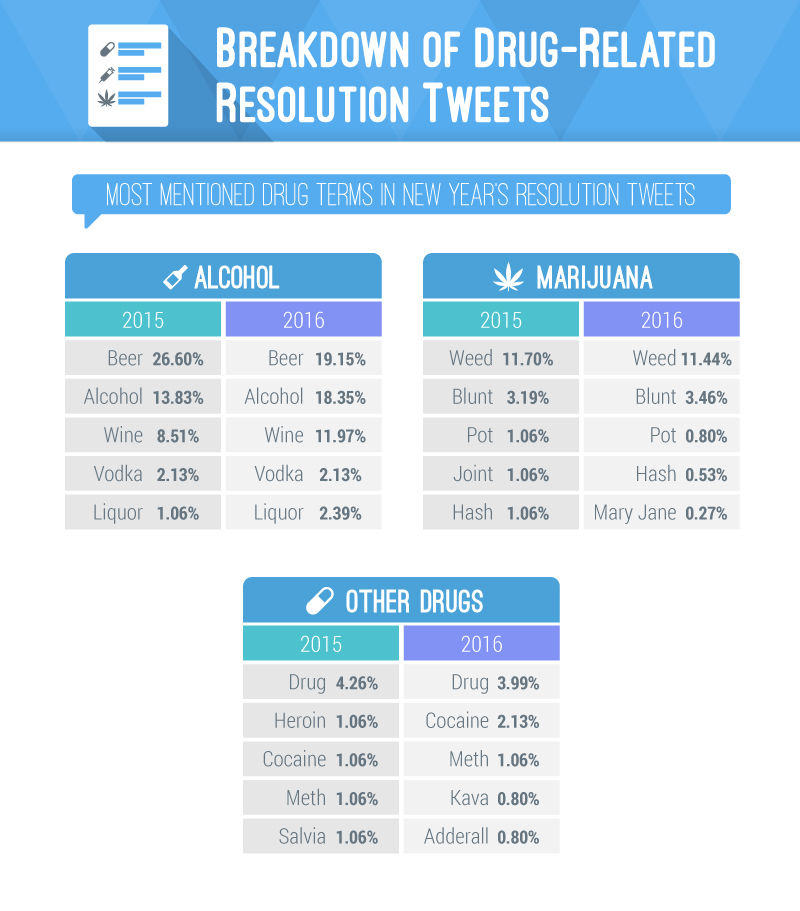 Alcohol is a broad category due to the many different varieties available. Of the people tweeting about resolutions concerning alcohol in 2016, beer was first in line with 19.15% of total substance-related tweets. “Alcohol” in general followed beer with 18.35%. Wine, vodka, and liquor follow beer and alcohol with liquor ranking the lowest. The above chart represents the top five most common forms of alcohol, according to terms people use on Twitter. 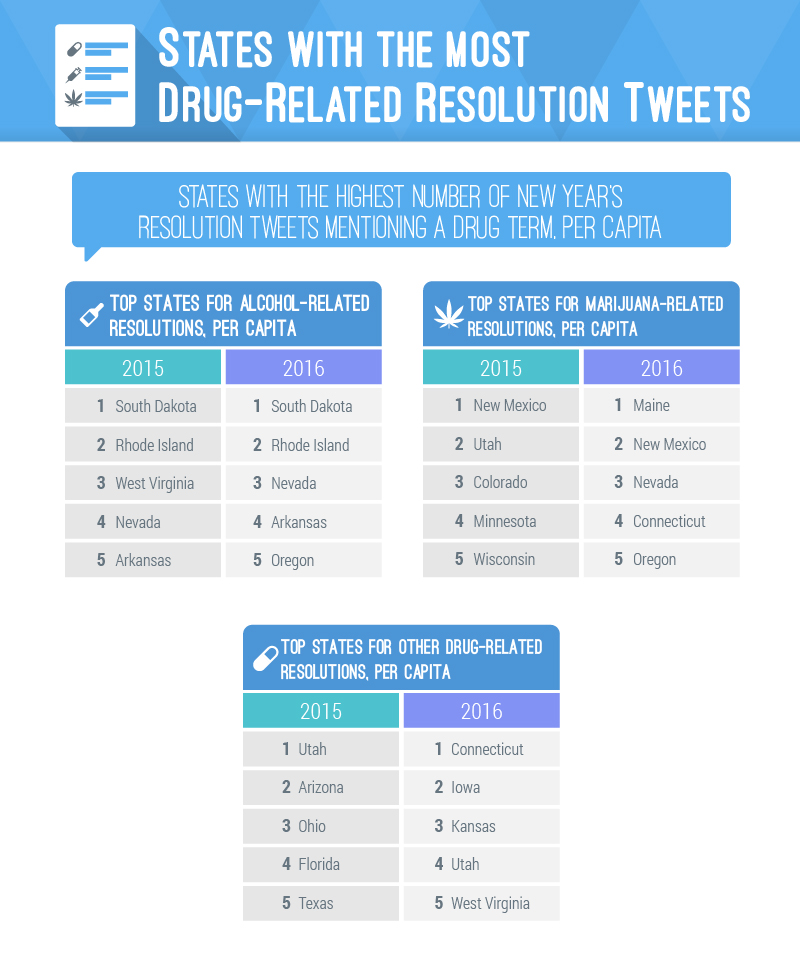 Thinking about our country as a whole is one thing, but considering each state’s relationship with drugs is another interesting take on the subject. In both 2015 and 2016, most of the alcohol- and resolution-related tweets per capita came from South Dakota.

The concept of drug use in our country is a major hot topic issue. The above charts demonstrate an awareness of drug users who are potentially interested in giving up their habits as New Year’s resolutions. It is important to remember that you never need a new year to make big changes in your life. If you are concerned about your own drug use, visit DrugTreatment.com or call 1-888-851-2649 Who Answers? today for advice on treatment that’s right for you.

We used calculated fields to sort any of these tweets containing the name of both legal and illegal substances, and further sorted these drug-related tweets by established categories: alcohol, marijuana, and other drugs. One caveat: We did not determine the tweets’ sentiment, so while all considered resolution tweets mention a drug, some may not be related to quitting or reducing this drug use.

Using the drug–related tweets’ geotagged locations, we then mapped their frequency by state and compared the volume of tweets to the state’s per capita population.

Feel free to use the assets found on this page. When doing so, please attribute the authors by linking back to this page so that your audience can see all the elements involved.